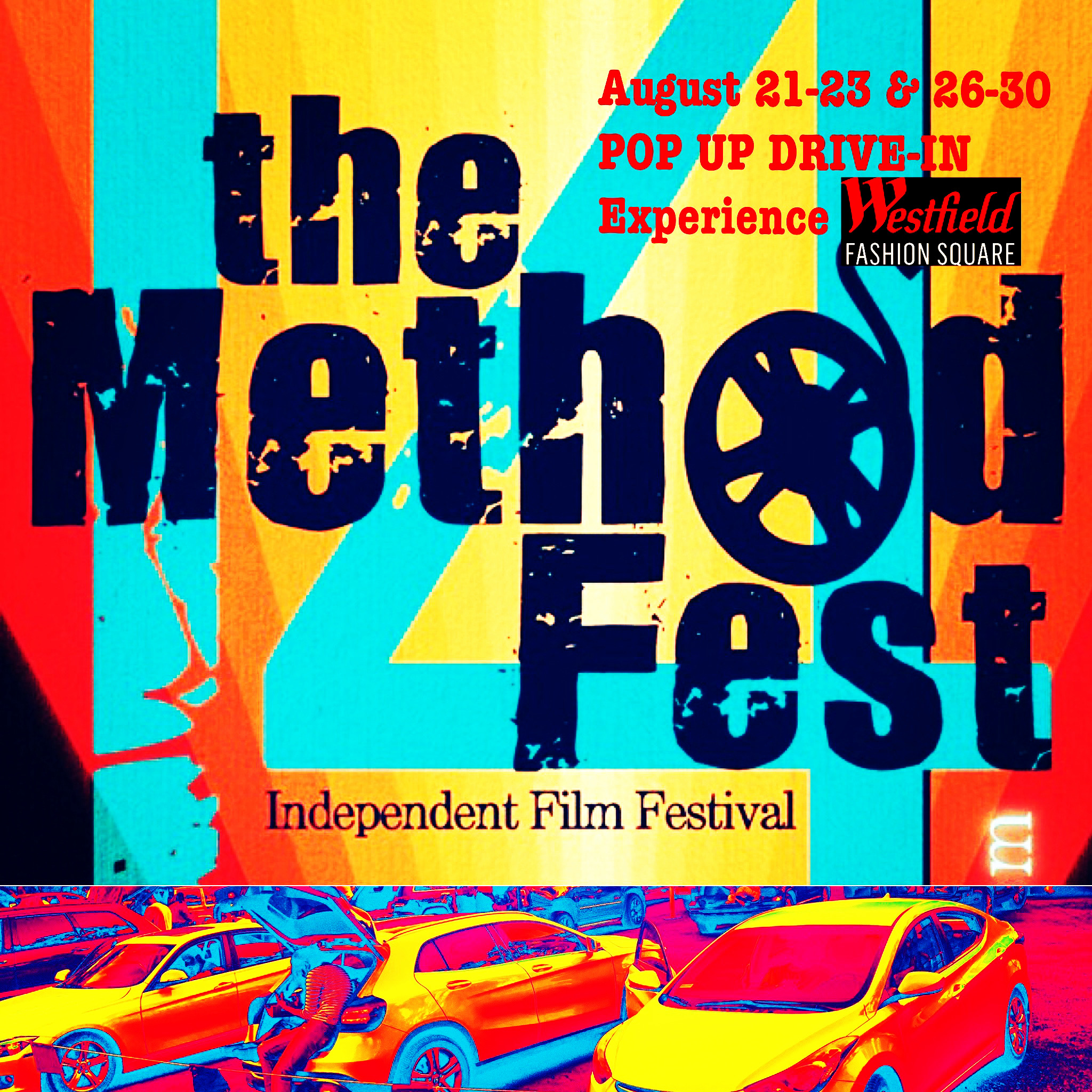 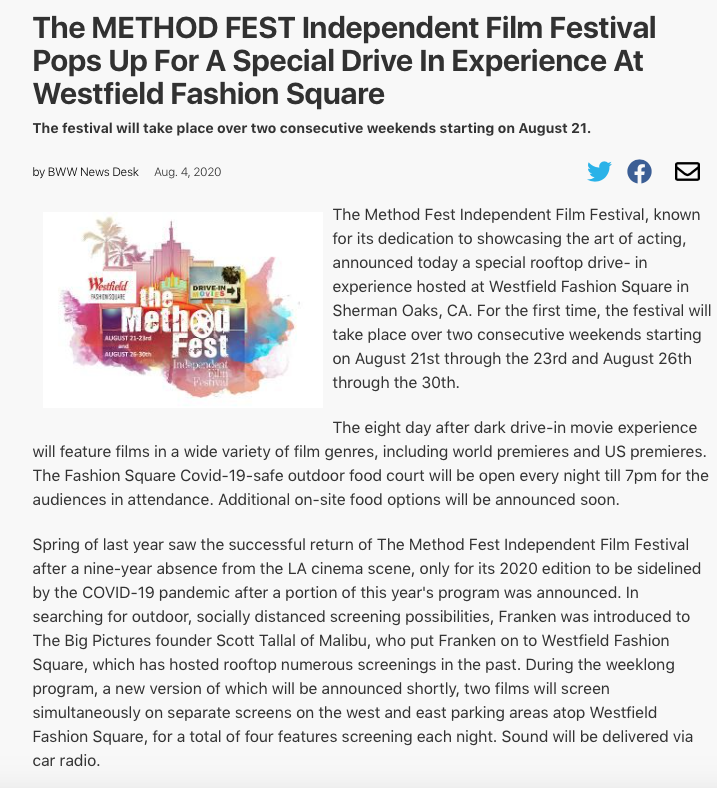 All films, originally accepted for the postponed

festival date, will be played based on the original

schedule and subject to their availability to play.

All existing purchased tickets will be accepted for

may be subject to change.

These new dates are also subject to change based on

the current and future situation with COVID-19. The safety

of our audience and filmmakers is our main concern,

and any future changes to our festival dates will

be based on that concern.

Named for the "Stanislavski Method," which brought truth and realism to the world of acting, The Method Fest is the only major film festival in the U.S. that truly pays homage to the actor.

The Method Fest is the Actor's Film Festival, a festival of discovery, seeking breakout-acting performances of emerging stars and established actors in story-driven independent films. 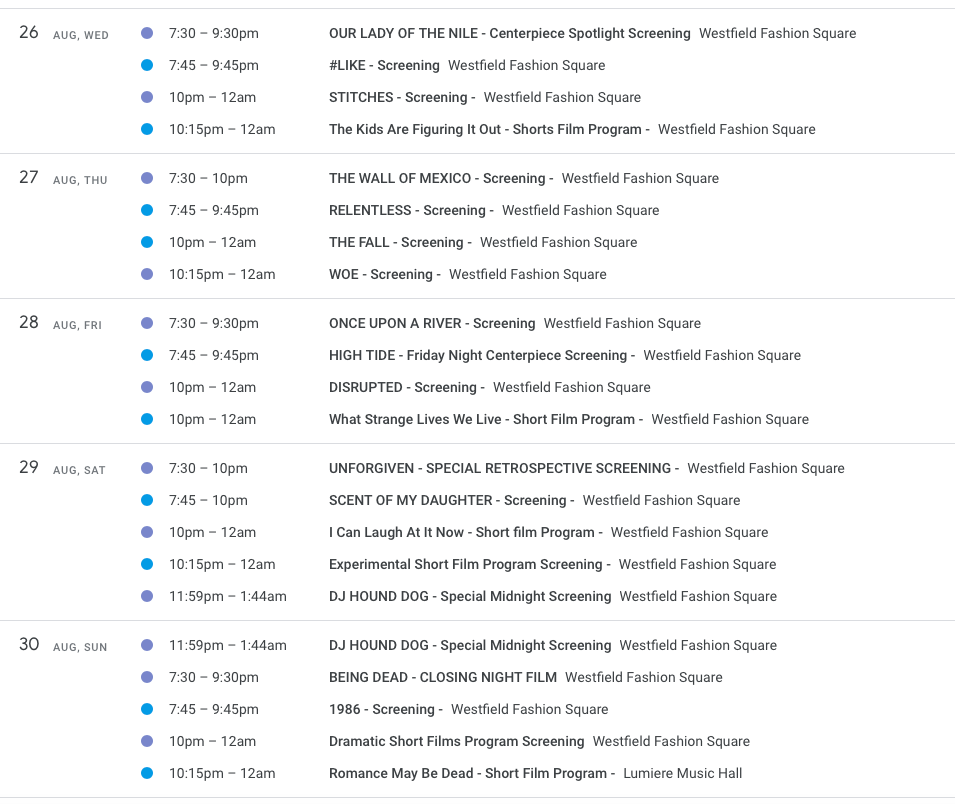 A contemporary "dramedy" about a group of Bay Area friends in their early 40s navigating one of those life moments together: expecting a surrogate baby, a long and deep friendship in jeopardy, two women finally deciding to marry after years of living together, a novelist with crippling writer’s block. Capturing this next uncharted chapter of their extended family, Beautiful Dreamer explores the messy secrets and complicated nature of parenthood and the modern family, all the while testing the boundaries of love and friendship and the bioethics of surrogacy. DIR Amy Glazer. SCR Patricia Cotter. CAST Wendie Malick, Louis Ozawa, Erin Daniels. (U.S.) World Premiere

THE JONESTOWN DEFENSE - OPENING NIGHT FILM) - 8/21
On the Florida Gulf Coast in the Spring of 2009, a Sarasota businessman is struggling with both a collapsed economy and a personal life in free fall.  This is a story of how personal narcissism and professional corruption can destroy a man who believes he’s fighting for financial survival, but in the end discovers that what is truly at risk is his soul.
DIR Greg Takoudes SCR Maeve McQuillan, Greg Takoudes, Dennis Ostermaier CAST Dennis Ostermaier, Robert Stevens,
Michael Michaelessi, Amy Seimetz, Mary Bronstein (U.S.) World Premiere

OUR LADY OF THE NILE - Centerpiece Spotlight Screening - 8/26

A coming-of-age story about of a group of Rwandan schoolgirls at a Belgian-run Catholic boarding school.  Dir Atiq Rahimi

Laura has lost control. After she sleeps with Weisman, the lead contractor building a barbecue shed in the backyard of her beach house, the other two workers on the job cross a boundary, making Laura feel that her space has been encroached upon. As Weisman disappears, sheltered and privileged Laura must manage the laborers herself. Her admonishments fall flat, forcing her to retreat behind the pristine glass windows -- keeping watch and being watched simultaneously. Tensions churn, the workers become more unruly, and Laura ignores calls from her husband while downing bottles of red wine, waiting for Weisman to reappear. DIR Verónica Chen. SCR Verónica Chen. CAST Gloria Carrá, Jorge Sesán, Cristian Salguero. (Argentina) West Coast Premiere

DJ HOUND DOG - Special Midnight Screening - 8/29
Musical Comedy DJ Hound Dog is being released for the First time ever in the USA.
The ultimate midnight movie, DJ Hound Dog, Starring Jon Jacobs, Charlotte Lewis, Ivelin Giro and the late Tina Leiusupported by an All Star Cast of Top international DJ's including Tiesto, Carl Cox and Pete Tong and Judge Jules was released throughout Europe under the title Hey DJ and later as Miami II Ibiza.
Now the Fully Restored Directors cut with its original Rock 'n Techno Soundtrack is finally being launched in the USA and will Kick off its US Theatrical & VOD release at Midnight August 29th at the Method Fest Pop up Drive in Film Festival..

OUTSIDE STORY -  Spotlight Screening - 8/22
After locking himself out of his apartment, an introverted, heartbroken editor finds himself on an epic journey up, down and around his block with life-altering ramifications.  DIR Casimir Nozkowski, CAST Brian Tyree Henry, Sonequa Martin Green, Sunita Mani, Olivia Edward, Asia Kate Dillon. (U.S.) West Coast Premiere

The film adaptation of Jim Crace's award-winning novel follows a mid-life couple's effort to rekindle their marriage by traveling back to the place where they fell in love -- only to arrive at the point of their sudden deaths. DIR John Meyers. SCR John Meyers. CAST Linus Roache, Elizabeth Marvel, Kathryn Erbe. (U.S.) West Coast Premiere

Elena is a student in Minsk, Belarus. She has a passionate but increasingly difficult relationship with her boyfriend Victor. When her father is arrested, she has to continue his illegal business. In order to make deals for him, she repeatedly has to drive into the 'forbidden zone' of Chernobyl. She finds herself attracted by the zone's deceptive beauty -- but her life seems more and more contaminated by a destructive force. DIR Lothar Herzog. SCR Lothar Herzog. CAST Aleksey Filimonov, Khelga Filippova, Vitaliy Kotovitskiy. (Germany) West Coast Premiere

When resourceful 15 year-old Damien decides that his parents are all wrong for each other, he enlists best friend Erin to help him set them up with other people. DIR Scott Dow. SCR Dev Wadhwa. CAST Kelen Coleman, Stephen Schneider, Aidan Langford. (U.S.)

When a local killing stirs up haunting memories of his wife's unsolved murder from decades earlier, an Oakland widower is drawn back into the hunt for justice with everything to lose. DIR Andre Welsh. SCR Andre Welsh. CAST Geoffrey Lower, Daniel Roebuck, Marie Wilson. (U.S.)

It was meant to be a small break-in and Piet was only meant to be the driver. “We just crack the safe and off we go. Pretty easy!” says Herm, Piet´s brother. But when Herm takes a hostage and directs Piet into a vacant house, Piet faces the hardest challenge of his life: a kidnapper trapped between his hardliner brother, his own humanity, and the hostage Konstantin. DIR Steffen Cornelius Tralles. SCR Steffen Cornelius Tralles. CAST Enno Hesse, Florian Hacke, Mats Kampen. (Germany) U.S. Premiere

A group of former computer science classmates from university, along with their couples, meet for dinner after being out of touch for several years. During the meal, one of them confesses to having decrypted one of the internet’s most secret files and shows them the augmented reality application found within. Their efforts to alter it unleash conflicts with unexpected consequences which will only get worse by the second. DIR Manolo Munguia. SCR Sergio Martinez, Manolo Munguia. CAST Míriam Tortosa, Mariona Tena, Bernat Mestre. (Spain) West Coast Premiere

Woodstock teen Rosie, mourning the first anniversary of her younger sister's suicide, discovers the mysterious man who sexploited and bullied her sister is back on-line trolling for new victims. After the authorities refuse to get involved, she finds a darkness she never knew she had when she takes justice into her own hands. DIR Sarah Pirozek. SCR Sarah Pirozek. CAST Marc Menchaca, Jeff Wincott, Samantha Nicole Dunn, Dakota Lustick. (U.S.)

Margo Crane's odyssey on the Stark River introduces her to a world filled with wonders and dangers about life, death, and family histories. A mix of mystery, science, and magic, based on a book of the same name by Bonnie Jo Campbell. DIR Haroula Rose. SCR Haroula Rose. CAST Kenadi DelaCerna, John Ashton, Tatanka Means. (U.S.)

A tempestuous romantic drama in seven vignettes that chronicles an interracial marriage, telling a story of turmoil and tenderness as two people try to make their relationship last.

Combining elements of thriller and melodrama, Stitches deals with the hot social issue of newborn babies being abducted from Serbian hospitals. The script by Elma Tataragic tells the story of a woman who was told her newborn died 20 years ago, but who firmly believes the baby was stolen. DIR Miroslav Terzic. SCR Elma Tataragic. CAST Snezana Bogdanovic, Jovana Stojiljkovic, Marko Bacovic. (Serbia) U.S. Premiere

When Michael meets Evie, they believe they're meant for each other. But as the leaves fall and the weather grows colder, their all-too-perfect tale of love at first sight is confronted with reality. DIR Ben Senior. SCR Ben Senior. CAST Robert Petrie, Sara Gray. (U.S.)

Four people on the fringes of society are going to make a "seismic" encounter. Four vagabonds, with seemingly no future, will discover the meaning of hope.

A brother and sister struggle to connect one year after their father's death. When both stumble on a haunting family secret, one searches for meaning while the other tries to put an end to it. DIR Matthew Goodhue. SCR Matthew Goodhue. CAST James Russo, Jessie Rabideau, Ryan Kattner. (U.S.) World Premiere

After attending a friend's perfect wedding, marriage-averse Christine finds an engagement ring in her boyfriend’s jacket pocket. Once Christine confronts him about the ring and her distaste towards marriage, she is faced with an ultimatum -- get engaged or break up. DIR Portlynn Tagavi. SCR Portlynn Tagavi. CAST Deeq Adam, Charis Arakaki, Mia Calderene. (U.S.)

Two young women meet and over the course of one evening develop a connection that neither was expecting. DIR Maura Smith. SCR Maura Smith. CAST Abbey May, Jackie Martin, Lourdes Martinez. (U.S.)

On the verge of moving in together, a couple has to reevaluate what they want when they realize they might be pregnant. DIR Erica Elson. SCR Erica Elson. CAST Alexandria Collins, Taylor Fogg. (U.S.)

Somewhere in the crowd, there's someone for you. Two busy professionals confront their undeniable attraction, and their demons, after a chance meeting at the train station. DIR Auden Bui. SCR Mark Cornell. CAST James Babbin, Sage Porter, Tim Conlon. (U.S.)

Each year thousands of budding actors take that huge leap of faith and move to L.A. or New York in search of stardom.